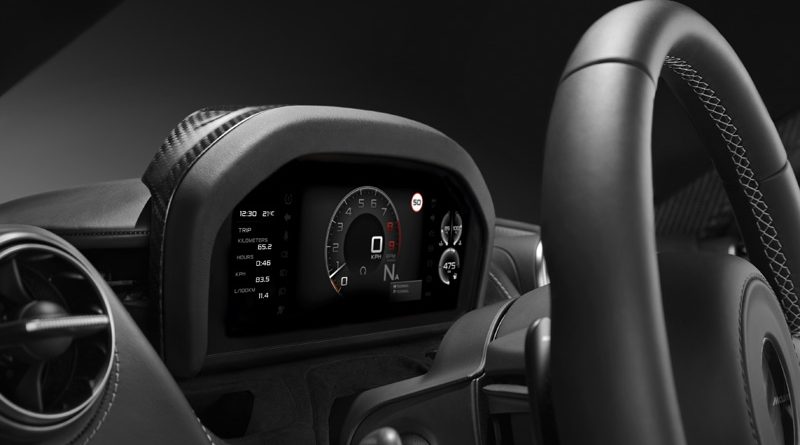 When driving an extremely fast car that cost well over six figures, its not a bad idea to have as much information available to you as possible.  Though there are also times when that information can get distracting; and with the advent of digital gauge clusters lots of information can mean a lot of bright flashy lights and images all competing for your attention.  That can definitely be a bad thing when trying to concentrate on the next apex ahead of you.

To combat this possible info overload, McLaren has designed a nifty feature into the next Super Series car (AKA the 720S), a fold away gauge cluster.  With the push of a button the digital cluster which features a sizable screen will fold away and reveal a much smaller, thinner display which relays only the selected gear, RPMs, and speed.  It is a pretty neat feature and when you think about it, its a very McLaren thing to do.

You can see McLaren’s “Folding Driver Display” in action in the video below.  For more info you can read the official press release below the video.

The second-generation McLaren Super Series, which will be revealed next week at the 87th Geneva International Motor Show, will feature an all-new driver interface that incorporates a revolutionary approach to information display and delivers unrivalled levels of driver engagement.

The McLaren Driver Interface will be complemented in the second-generation Super Series by switches machined from aluminium and the finest leather upholstery and trim, confirming the blend of hand-crafted luxury and innovative technology inherent in a McLaren. In combination with a light, airy cabin that offers unparalleled visibility and space, this level of sophistication will provide a driver environment that is set to rapidly become recognised as the most welcoming and engaging in the supercar sector.

In Full Display Mode, the default on vehicle unlocking as part of the ‘welcome’ sequence, the Folding Driver Display provides a comprehensive range of information on an upright TFT screen, the display format changing according to a driver’s choice of Comfort, Sport, or Track driving modes. Slim Display Mode, either selected manually at the touch of a button or automatically deployed when linked to active dynamics functionality, sees the driver display slide down to show only essential information in a strip. This is the ideal condition for drivers wanting the minimum of distraction, either when on a track or for those who prefer simplicity of visual information.

The 8-inch Central Infotainment Screen comprises the other element of McLaren’s advanced new integrated approach to sharing information. The driver’s portal to the all-new infotainment system of the second-generation McLaren Super Series, the screen will run multiple applications simultaneously on a vertical touchscreen carousel providing control of audio, media, navigation and other convenience features, as well as having several quick-access keys.

Comprehensive information about the second-generation Super Series will be confirmed on March 7 and a portfolio of additional images will be issued.