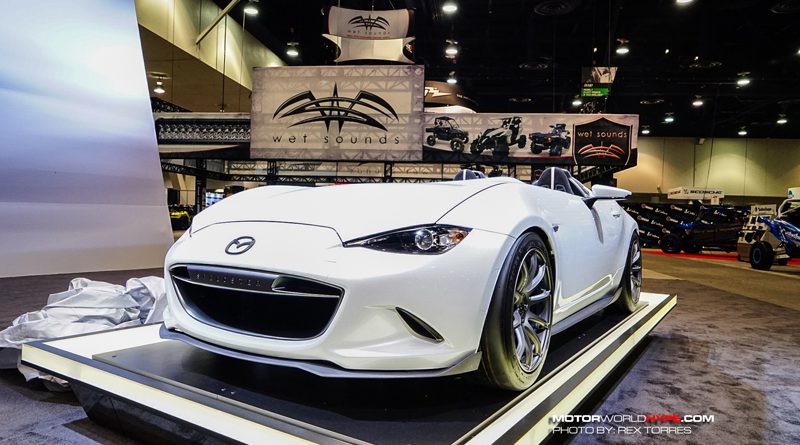 Mazda’s MX-5 Speedster concept actually made its debut at the SEMA Show last year.  It was created as a love letter to the lightweight, no frills, sports cars of the 1950s.  Last year, the MX-5 Speedster weighed just 2,080lbs which made it 150lbs lighter than a stock MX-5 convertible.  This year Mazda wanted to push the envelop even more and take additional weight out of the Speedster.   The question is how do you take weight out of a car that has very little excess weight to deal with?  Needless to say they found a way.

First the Brembo front brakes were replaced with lighter rotors and calipers from the MX-5 Sport trim model.  The interior gauges were replaced with a singular digital screen.  An additional 25.1lbs was saved by replacing the stock battery with a Braille GreenLite G20 battery that weighs just 4.5lbs.  Other items on the diet remain a mystery but when it was all said and done 100lbs total was shaved off the MX-5 Speedster’s previous weight.  It now weighs just 1,980lbs!

To freshen up the look the Speedster was sprayed in “White Ether” paint.  I totally commend Mazda for going for the gusto here but I think now, the world desperately needs to see this thing on track to see just how much the weight savings improves track performance.  Get on that Mazda!  For now you can get a closer look at the MX-5 Speedster by clicking any of the thumbnails for an HD resolution shot.