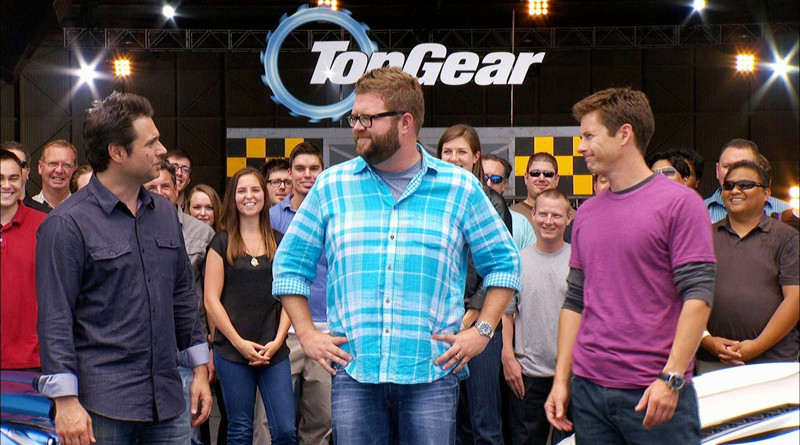 Late yesterday Rutledge Wood announced on his instagram feed that the Top Gear USA coming up this Tuesday is the last one he, Tanner Foust, and Adam Ferrara has shot for the History channel.  In the post he hints more than once that Top Gear USA isn’t dead but its just not going to be on History anymore.  Its pretty shocking since Top Gear USA has been one of the bigger shows on the channel for the last several years.  Perhaps in the more recent seasons Top Gear USA wasn’t performing the way History wanted it too or it could be due to budget cuts.  No specific reason was cited by Rutledge in his post so its really anyone’s guess.

However, as mentioned before Rutledge seemed to convey that Top Gear USA isn’t gone for good.  I’m sure as I am writing this the BBC is shopping the show around to other networks and I personally think the show has a pretty good chance of getting picked up by someone else.  The question is: who?  There were a few networks that immediately came to mind when thinking about where the show could wind up.  The first network I thought of was The Discovery Channel.  With Mythbusters officially over, The Discovery Channel has a void to fill and a proven brand like Top Gear could be a good fit.  Even if the network execs didn’t think The Discovery Channel was a good fit for Top Gear USA, Discovery Networks has a whole other channel dedicated specifically to automotive content called Velocity which would be a great home for Top Gear.

The other channel I thought of was CNBC.  Now, I know that sounds like a weird place to put Top Gear but this network picked up Jay Leno’s Garage so they clearly have an interest in automotive content.  In fact, Jay Leno was originally supposed to be a host of Top Gear USA so perhaps he may convince CNBC to pick the show up.

Why do you think The History Channel and Top Gear USA are parting ways?  What network would you like to see pick up the show?  Let us know your thoughts in the comments or tweet to us at @MotorworldHype.  To see Rutledge’s original instagram post, scroll below.

I’m very sad to say, but Tuesday night’s #TopGear on @History is the last TG US that we have shot for you. I’m not saying Top Gear USA is done, but it’s done for the immediate future on @History . I remember the day that I got the phone call to ask if I’d be interested in talking to one of the producers about possibly being one of the hosts of the US’s version of the world’s most iconic car show. It’s been an amazing ride for sure, and although I don’t think the show is done, it appears that it’s done with our friends at History, and we’re incredibly grateful for being a part of the A&E Networks family. I have had so much fun with Tanner and Adam, they really are like brothers to me. We’ve traveled this amazing country and to some of the coolest places on earth together, and even in the hardest moments, it’s been a total dream come true. The three of us will stick together and hope to bring you much more Top Gear USA, albeit it somewhere else it appears. To the FANS- we cannot say enough how much we truly appreciate each and every one of you. You have always been there for us in great numbers, and we really do love you all. You are the reason shows like ours exist, and you’re also the reason we’ve been so lucky to do this show for so long together. We never dreamed how many families would sit and watch our show and laugh together. We never knew how many couples would sit and watch three goofballs go out and try to make each other laugh. And yet, you all watched…and you told other people and shared in the joy. To everyone who worked on TGUS- thank you. For everything. You’re our family and you’re the reason we got to do this for so many years together. So here’s a toast to all of you out there. I hope you’ll watch Tuesday night and enjoy the last show we made for you. We took a trip of a lifetime down to Cuba and drove classic American cars from the 50’s down there, and I can tell you it’s one of the coolest things we have ever done together. Cheers and lots of love, Rutledge