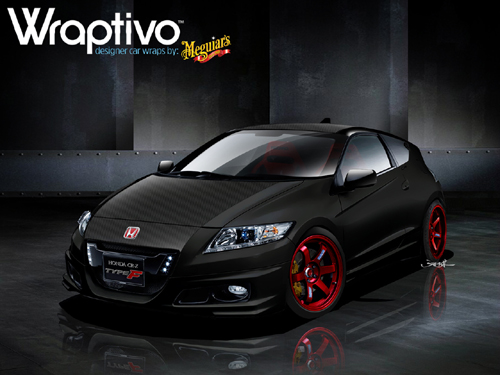 We have the inside track on Wraptivo’s 2010 SEMA plans and the big news is the announcement of their Honda CR-Z “Type-F” custom SEMA build.  While there will be a few other CR-Z projects making their way to the SEMA floor most are top secret.  Wraptivo has decided to go against the norm and are releasing nearly everything planned for their build.  That includes showing off this beautiful rendering created by Jon Sibal of what the “Type-F” concept could possibly look like when its completed.

Wraptivo has several upgrades planned for their Type-F CR-Z including a suspension package from Tein, a ECU tune by Hondata, Volk Racing wheels, flat black/carbon fiber vinyl wrap scheme, and HKS Supercharger.  Yes, that’s right.  Wraptivo, with the help of HKS are supercharging a hybrid.  Somewhere a tree-hugger is crying…  Scroll down below for the size image and press release!

September 1st 2010 Irvine, CA-WraptivoTMwill produce our very first in house SEMA car in the form of a 2011 Honda CR-Z sport hybrid concept build dubbed “Type-F”.The goal for the WraptivoTMHonda CR-Z Type-F Concept is to evoke the notion of fun, which lies at the core of the CR-Z DNA while also giving a nod to the spirit and Honda heritage of the CR-Z.   The Type-F concept will feature a sportier aesthetic over stock with the use of a combination of Honda Accessories Aero pieces and along with other aero components from Japan. The aero package will be complemented with a design package created to give this concept a special uniqueness yet with a familiarity that is still unmistakably Honda. The vehicle will be wrapped with WraptivoTMMatte Black and Carbon Black Film while small accents will be left in gloss black.  The CR-Z will act as a canvas for Wraptivo to showcase its vehicle wrap options and give customizers a preview of how they can take advantage of this technology as a new way to protect their factory paint while also having the ability to easily change the look of their vehicle.

To increase performance we are looking to develop a supercharger system, suspension package, an ECU Tune, exhaust system, and other components with the help of our technology partners: Honda Accessories, Tein , HKS, BF Goodrich, Volk Racing, Hondata, and others to be confirmed at a later time.   Interior enhancements will be subtle but functional. Recaro seats, a sport shift knob, and alcantara panels will be implemented to give the driver a sportier experience for fun filled excursions.

The  completed WraptivoTMHonda CR-Z Type-F will closely resemble the concept rendering created for us by automotive digital illustrator Jon Sibal (JonSibal.com) though as the Type-F Concept is still in the early stages of production the final version may differ from the illustration slightly.

The Wraptivo Type-F Concept will make its official debut at the 2010 SEMA Show in the American Honda exhibit while the Wraptivo designer car wraps by Meguiar’s product line will also be launched at the same global event.  Visit booth 24643 (in center hall) to learn more about Wraptivo and the American Honda booth to see the Wraptivo CR-Z. From there it is our intention to test all of our performance upgrades by entering the CR-Z Type-F in Source Interlink’s Super Lap Battle time trial event held the week after SEMA’s conclusion.

Updates on the Wraptivo Honda CR-Z Type-F concept will be available on the official WraptivoTMtwitter page (twitter.com/Wraptivo), Facebook page (facebook.com/WraptivoFB), as well as on MotorworldHype.com, the official online media partner for the WraptivoTM Honda CR-Z Type-F Concept.  There will also be a feature article and pictorial in an upcoming issue of Import Tuner magazine.